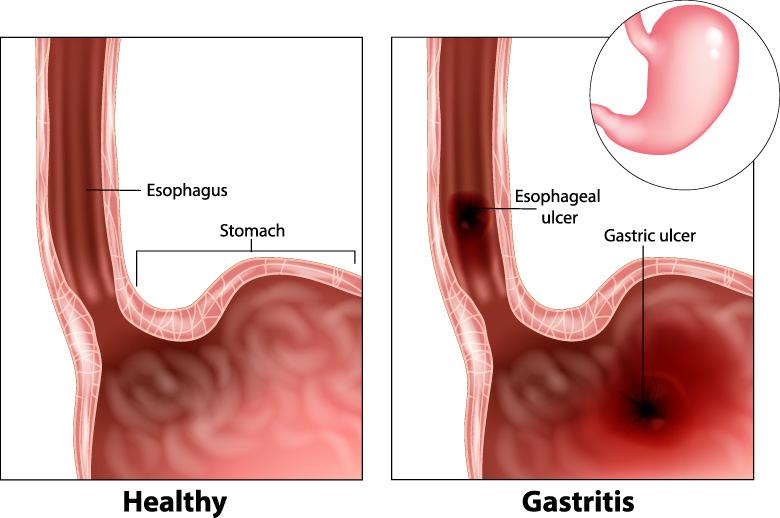 There are 4 types of gastritis:

What are the symptoms of gastritis?

In most cases, gastritis does not display any symptoms. However, the most common symptoms of gastritis include:

Gastritis may be caused by:

What are the risk factors for gastritis?

The following factors increase your risk of developing gastritis:

What are the complications and related diseases of gastritis?

Left untreated, gastritis can lead to the following health problems:

Some cases of gastritis can lead to gastrointestinal bleeding. This may cause anaemia, a condition wherein the total amount of red blood cells decreases. Anaemia can cause shortness of breath, weakness, and dizziness.

Gastritis caused by autoimmune problems may have an adverse effect on the body’s absorption of vitamin B12. Insufficient vitamin B12 can lead to pernicious anaemia, which can cause you to feel weak and experience numbness in your hands and feet.

When gastritis worsens the sores in your stomach or ulcer, stomach contents may spill into the abdomen. This may cause bacteria to spread and lead to peritonitis, an inflammation of the membrane lining the inner abdominal wall. Peritonitis may lead to a life-threatening inflammation called sepsis.

Gastritis caused by H. pylori and autoimmune problems can lead to growths in the stomach lining, which may increase the risk of developing stomach cancer.

How to prevent gastritis?

You can prevent gastritis by observing proper hygiene practices and maintaining a healthy lifestyle. In general, you should: