Overview What to Expect Our Expertise & Doctors FAQ

What is Gamma Knife radiosurgery?

Gamma Knife radiosurgery is a form of radiation therapy that accurately focuses hundreds of individual laser beams at a tumour. It is often used as an alternative therapy to chemotherapy, surgery or other forms of radiation oncology to treat brain tumours. 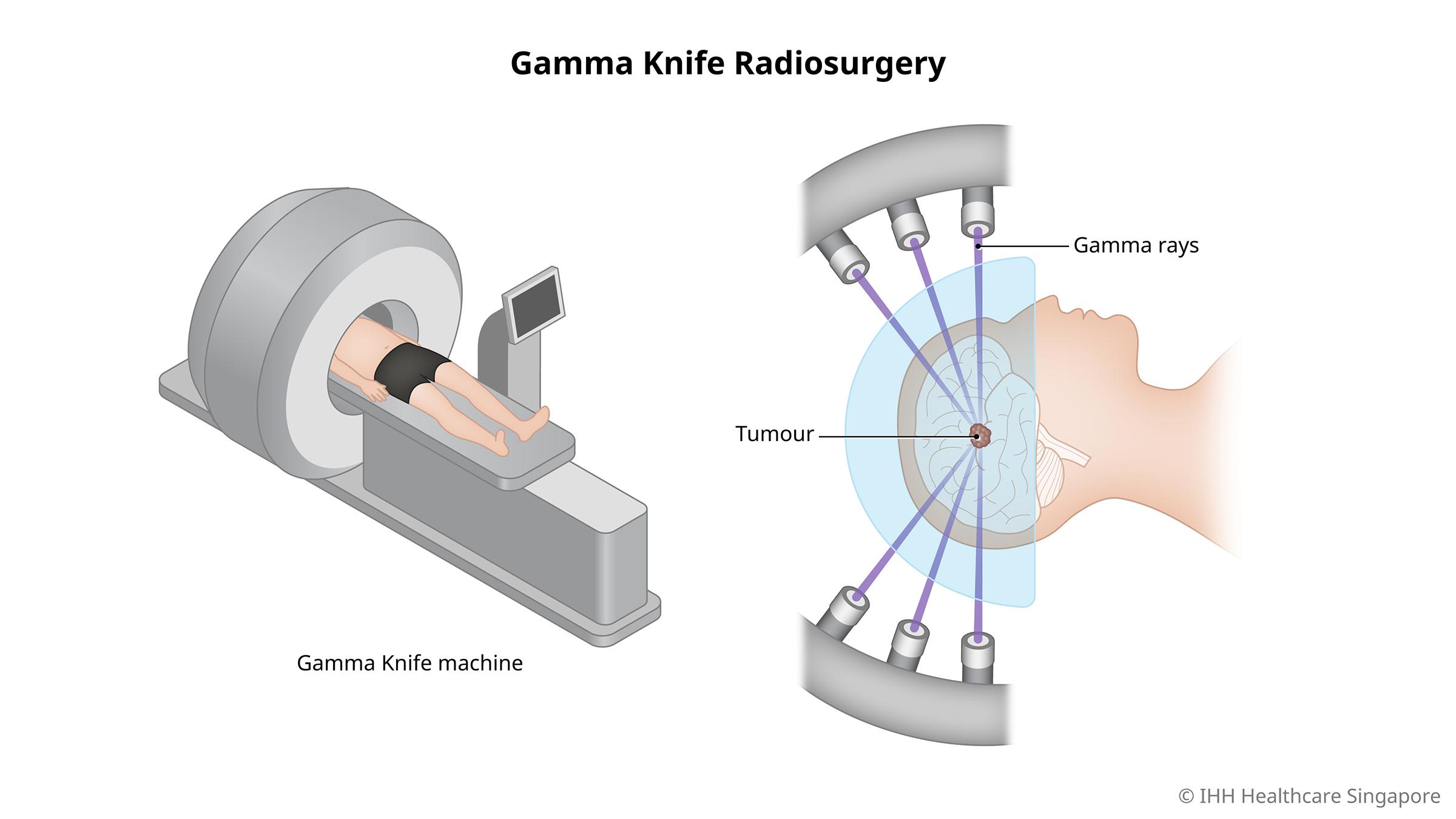 Why do you need Gamma Knife radiosurgery?

Gamma Knife radiosurgery can be used to treat the following conditions:

The effects of the Gamma Knife radiosurgery will not be immediate but gradual. As radiation treatments are designed to stop the growth of tumours or lesions, you may only see progress over a period of weeks or months.

Your doctor will stay in contact with you during this period. To track your progress, you may need follow-up magnetic resonance imaging (MRI) scans, computed tomography (CT) scans or angiography examinations.

Who should not do Gamma Knife radiosurgery?

If you are expecting, you should discuss with your doctor if you should go ahead with Gamma Knife radiosurgery.

What are the risks and complications of Gamma Knife radiosurgery?

Despite its name, Gamma Knife radiosurgery does not involve surgical incisions. This makes it less risky, especially when compared with traditional neurosurgery.

The risks and side effects of Gamma Knife radiosurgery may include:

How do you prepare for a Gamma Knife radiosurgery?

Your doctor will advise you on how to prepare for your Gamma Knife radiosurgery. Some advice may include:

You should also inform your doctor if you have:

What can you expect in a Gamma Knife radiosurgery?

Gamma Knife radiosurgery generally involves specialised equipment and imaging scans. Usually, only sedation or local anaesthesia is needed. As patients do not have to go under the knife, there is a reduced risk of infection and bleeding.

The procedure itself takes between 15 minutes – 1 hour or more. However, the preparation and planning may take the team several hours.

The radiosurgery team will attach a lightweight frame to your head with 4 pins. You will receive local anaesthesia where the pins will be placed. The pins will be placed on each side of your forehead and in the back of your head. This frame stabilises your head during the radiation treatment and serves as a reference on where to focus the beams of radiation.

You may feel pressure for a few minutes as the pins are tightened. This sensation will remain until the frame is removed at the end of the entire procedure.

Next, a radiation therapist will take measurements of your head. They will also perform either a computerised tomography (CT) or magnetic resonance imaging (MRI) scan on you, with the head frame in place. If necessary, a small needle may be placed in the back of your hand or in your arm to inject a dye into your blood vessels. This highlights tumours and blood vessels and helps with the planning.

Lastly, the radiosurgery team will review the results of your brain scans to determine the:

This planning process may take 1 – 2 hours. During this time, you can relax in another room. The frame will remain attached to your head.

Once the team is ready to begin your treatment, you will lie on a bed that slides into a Gamma Knife machine that delivers the radiation. Your head frame will be attached to a helmet inside the machine.

You should not feel the radiation or hear noise from the machine. There will be a microphone that allows you to communicate with the team during the procedure. The team will also monitor you closely using cameras from immediately outside the room.

The table will move out of the machine, and the radiosurgery team will return to the room. They will remove the head frame for you. After about 30 minutes, you should not feel much pressure from the head frame.

You may experience minor bleeding and tenderness at the pin sites. You will also be given medications in case you experience headache, nausea or vomiting after the procedure.

You will be monitored in the observation area for up to an hour before being discharged.

On the morning after your procedure, you can remove the bandages on your pin sites. Clean the sites twice a day with hydrogen peroxide or mild soap and water. You can also apply a small amount of antibiotic ointment on the pin sites for 3 – 4 days. Leave the pin sites exposed as they will heal rapidly.

You should wait for 24 hours before washing your hair. Waiting allows the pin sites to heal and prevents infection from developing in the wounds. If there is any bleeding, press on the area with tissue paper for 10 minutes.

Call your doctor if you notice any of the following:

Head to the accident and emergency clinic if you experience any of the following:

Mount Elizabeth Hospitals are established private hospitals in Singapore, with a skilled medical team that is experienced in diagnosing and treating diverse neurological conditions.

Our teams are experienced in collaborating to deliver smooth and accurate Gamma Knife radiosurgery for patients with brain tumours, AVMs and nerve disorders.

Our neurosurgeons and radiation oncologists

At Mount Elizabeth Hospitals, our neurosurgery and radiation oncology team is experienced at treating brain tumours using Gamma Knife radiosurgery. They are supported by a team of skilled radiologists who strive to deliver a comfortable and personalised experience at our Gamma Knife centre.

Together, our healthcare team will guide you through every step of the way with utmost care and attention.

Cancel
Male
Female
No results found for this filter
{previous}
{next}
This page has been reviewed by our medical content reviewers.