Cancer treatment is the procedure to remove, destroy or restrict the growth of cancer cells in your body. Oncology is the medical specialty that focuses on the diagnosis and treatment of cancer.

There are many different approaches to treat cancer. The 3 most common approaches are surgery, radiotherapy and chemotherapy. The ideal treatment option is selected based on the location of the tumour, stage of the cancer and other patient factors.

With recent medical advances, treatments such as proton beam therapy and intensity-modulated radiation therapy (IMRT) can target a high dose of radiation directly onto the cancer cells while the surrounding healthy tissue is exposed to as little radiation as possible.

Learn more about the different types of cancer treatments available, and speak to one of our specialists at Mount Elizabeth Hospitals to find the best treatment option for you. 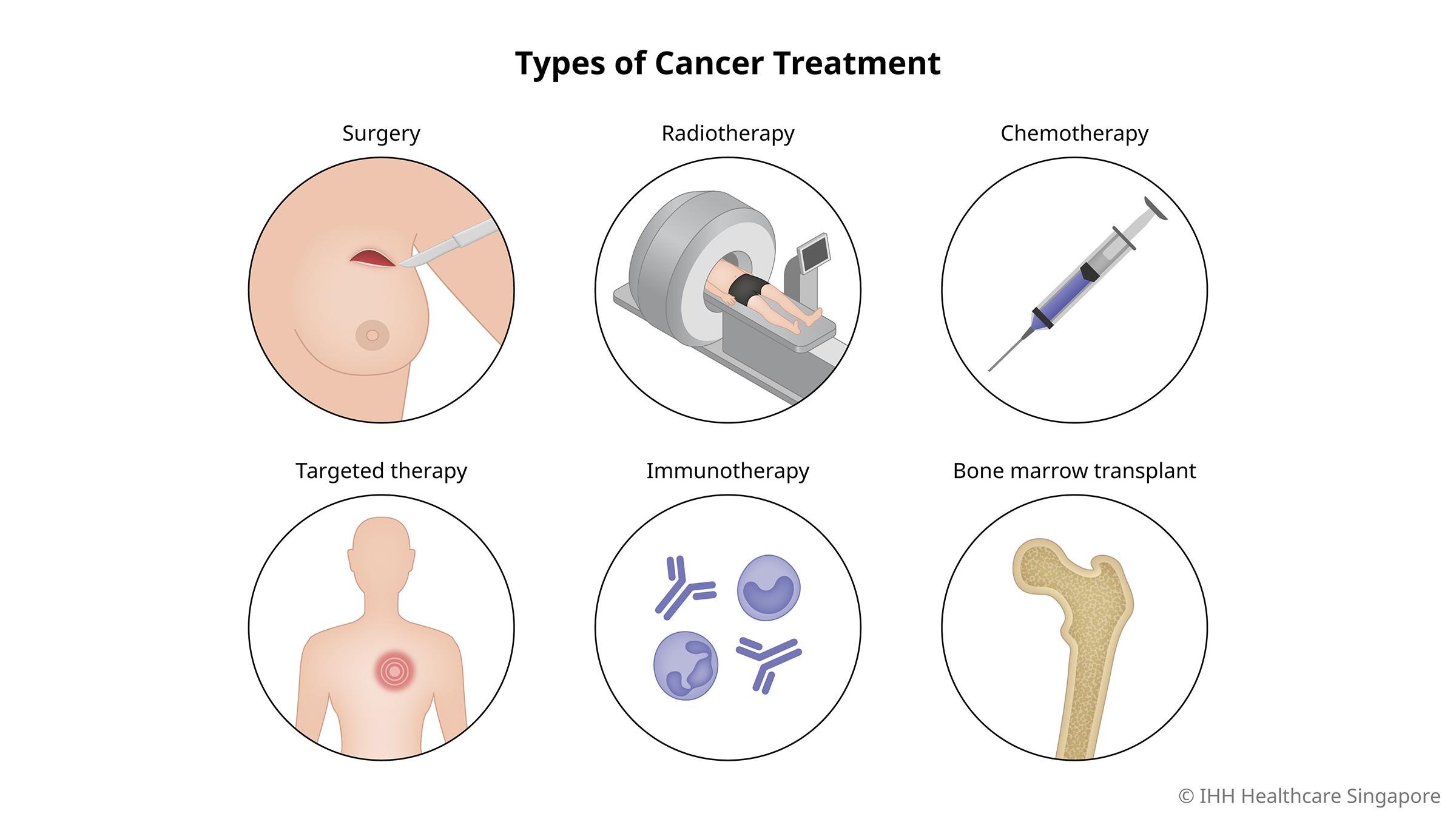 Collapse All
Expand All

Surgery involves removing a tumour directly. This is an effective way to remove cancer cells in the body if the cancer is confined to a specific area, especially during the early stages for some cancers.

Your doctor may recommend one of these surgical methods:

Radiotherapy, or radiation therapy, uses radiation to kill cancer cells in a small, targeted area. Your doctor may recommend radiotherapy to:

Chemotherapy, which is often known simply as 'chemo' , is the use of drugs to destroy or restrict the growth of cancer cells.

Chemotherapy may be associated with a range of possible side effects, which may affect the patient’s quality of life. These include loss of appetite, nausea, ulcers, fatigue, hair loss, diarrhoea and nerve damage. However, many of these side effects are transient and reversible, and can be treated with effective supportive medications such as anti-vomiting and anti-diarrhoeal medications.

Chemotherapy can be used to:

Besides conventional chemotherapy, your doctor may recommend chemotherapy combined with other treatments, such as concurrent chemo-radiation.

Targeted therapy, such as oral tyrosine kinase inhibitors for lung cancer and hormone therapy for breast cancer, blocks specific genes and proteins to disrupt the cancer cells’ ability to grow and spread.

Immunotherapy is a type of cancer treatment that helps your immune system fight cancer. There are different types of immunotherapies:

Peritonectomy (also known as cytoreductive surgery) and hyperthermic intraperitoneal chemotherapy (HIPEC) is a combined procedure which can be considered in some subsets of suitable cancer patients.

Peritoneum cancer is cancer that affects the peritoneum, the ‘outer skin’ lining of the organs within the abdominal cavity, such as the stomach, colon and rectum, small intestines, liver, spleen and pancreas.

Peritoneum cancer can either arise from itself, or when it spreads from the primary cancerous organ. This spread, known as metastasis, occurs commonly in cancers of the colorectal, gastric, ovarian or appendix area. Up to 25% of patients with advanced gastrointestinal and gynaecological cancer develop peritoneum cancer.

A thyroidectomy is the surgical removal of part or all of the thyroid gland. The thyroid gland is a butterfly-shaped gland at the base of the neck responsible for the production of hormones that regulate metabolism.

Thyroidectomy is used as a treatment for:

Cancer of the bones and soft tissue are relatively rare compared to the most common cancers. One of the treatment approaches is to amputate the entire affected limb.

Orthopaedic surgeons can perform limb salvaging therapy, where it may be possible to treat the bone cancer without the need to amputate the limb.

Limb salvaging treatment involves removing the part of the bones affected by cancer. Bone grafts may be required to replace the removed bone, or in some cases a prosthesis or implant may be used.

Limb salvaging treatment may require the use of chemotherapy and radiation therapy to control and eradicate the cancer cells either before or after the surgery.

Ovarian tissue freezing, also known as cryopreservation, is the removal of ovarian tissue and eggs and freezing them in order to preserve their functionality.

Certain cancer treatments, such as chemotherapy and radiation therapy, may affect the ovaries of a patient. This is especially for breast cancer, ovarian cancer or cervical cancer. A female cancer patient who has gone through these cancer treatments may find that it is more difficult to conceive after the treatment is complete.

Female cancer patients can opt to freeze their ovarian tissue and eggs before cancer treatment.

After cancer treatment is completed, the preserved tissue may be implanted back into the patient’s body, or it may be used for in vitro fertilisation (IVF). In this way, female cancer patients can preserve their fertility and continue to conceive after their cancer is cured. This can be especially useful for young women who have cancer.

Cancer Screening
Cancer Prevention
This page has been reviewed by our medical content reviewers.
In this section
Jump To